Well, it’s been three years since Lee and I took the electric car plunge and purchased our 2014 Nissan Leaf. After 46,000 km, the Leaf is still working great and still fun to drive. I thought it would be a good idea to give an update.

As expected, since most of our driving in the greater Fredericton, we save time by skipping past gas stations and simply charge while we sleep. More than once I’ve shaken my head at the Costco gas bar lineups while driving by.

Driving beyond the greater Fredericton area involves careful planning based on where chargers are located. Even so, we’ve managed to pull off two trips to PEI, a trip to Halifax and a tour of the south shore of Nova Scotia. While we can only drive 100-140 km per charge, the spacing of the chargers on the south shore tour conveniently allowed us to be tourists while the Leaf charged.

Pre-heating the car and seats in the winter has become second nature. Getting into the Camry and waiting for the heat to come from a slowly warming engine is so much more a drag in contrast.

Speaking of contrasts, another biggie is the act of reducing speed. The Leaf happily slows by using regenerative braking. This means that, as my foot reduces the pressure on the accelerator pedal, the Leaf slows by charging the battery. The result is that the brake pedal is used far less in the Leaf. (By contrast, the Camry keeps insisting that I have to grind the brake pads into dust to slow down, while the engine continues to burn gas.) Oh, and as a bonus, after 46,000 km, the brake pads on the Leaf still look great. 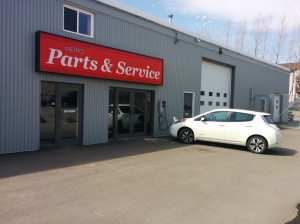 How about fuel savings? After the first year I calculated the saving on driving the Leaf instead of the Camry. At the time the cost of gas was bouncing around a $1 per litre and we had driven 15,000 km. The net savings were about $1,000.

Over the most recent 12 months we drove 9,000 km in the Camry. Expenses totalled $870: $700 for fuel and $170 for oil/service. Items such as insurance, registration and tires changes are excluded since they are unfair to the Camry. In the same period, we drove 16,000 km in the Leaf. Expenses totalled $420: $335 for electricity and $85 for a battery check (they actually did the check for free but that’s another story). So the Leaf cost us less than half the money to drive almost double the kilometres. Not bad! 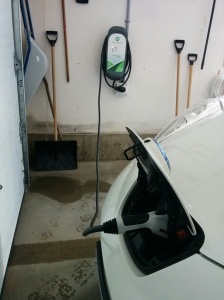 In hindsight we could have probably done without installing a charger in the garage. We could have charged by using the cable which came with the Leaf to plug into a regular outlet. In fact, during our 2016 tour of southern Nova Scotia we often plugged into regular outlets instead of chargers because it was more convenient. The 2018 Leaf comes with a cable which can be used with 240 volt outlets, like an outlet for an electrical stove. That means a 2018 Leaf owner can get the speed of a charger by simply installing a 240 volt outlet – much cheaper.

The main drive battery of an EV degrades over time. That’s expected and normal. In fact I often get asked how much the battery will cost when it’s time to replace it. It’s kind of like asking the owner of a gas car owner how much it will cost to replace the engine. The answer, for both questions, is that I never expect to have to replace it. The battery is expected to last about 10-15 year and under warranty by Nissan for eight years. Normally degradation after two years would reduce the battery capacity to about 85%. After three years we’re only dropped to 89% so I’m pretty happy. Why so good? Well, first because of the cool climate we have in Fredericton for most of the year. Second, we rarely charge the Leaf to 100% since lithium batteries prefer to sit around with a partial charge.

So, what’s gone wrong with the Leaf in three years?

All of these problems were fixed by the dealer under warranty.

Unfortunately, the Leaf cannot fulfill our desire to drive electrically everywhere. It does not have the range for long trips. Sure it has gotten much easier now to reach Moncton and PEI with the new fast EV chargers installed along the Trans-Canada. I’m very happy that NB Power, with NRC funding, got them installed. But I want to drive to Halifax, St. John’s, Toronto, Ottawa, and Vancouver. No matter how well it has performed, the Leaf was not designed to handle that kind of challenge. 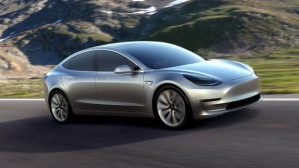 So on March 31, 2016 we put $1,000 down on a Tesla Model 3 reservation. The Model 3 has up to 500 km of range and access to the Tesla Supercharger Network. That means we can drive for 3-4 hours and recharge in the time it takes to have lunch. Tesla has received about 1/2 million reservations for this car. That number, and the fact that we live outside the USA, means I don’t expect to see it until the second half of 2018. Once it arrives we’ll say good-bye to the gas car. At that point we’ll only have two gas powered devices left: the mower and snow blower. Their days are numbered.

4 thoughts on “Three Years and Counting”